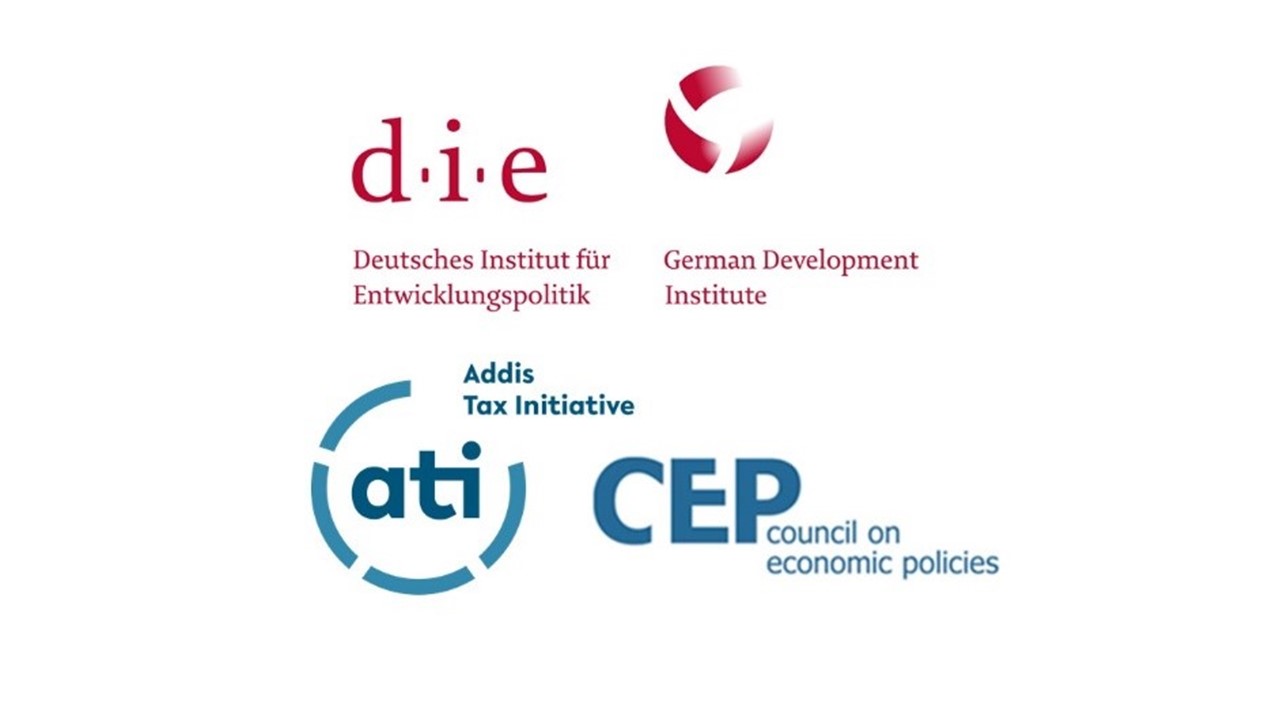 An in-depth exchange jointly organised by the Addis Tax Initiative (ATI), the German Development Institute (DIE), and the Council on Economic Policies (CEP)

Tax expenditures (TEs) are tax benefits that governments use to pursue various policy goals including attracting investment, boosting innovation and fighting poverty. They are costly as they lower government revenue and the tax liability of the beneficiary. They can also be ineffective in reaching their stated goals, endanger the transparency of national budgets, and undermine efforts put into creating a more equitable and sustainable society if not designed and assessed carefully. Despite their significant impact on countries’ domestic revenue mobilisation (DRM) efforts, pathways for reform and a broad understanding of their impact on development are yet to be consolidated.

To fill this gap and in light of Commitment 3 of the ATI Declaration 2025, which calls upon “improving tax transparency by publishing tax expenditures regularly” and “improving inter-agency cooperation on tax expenditures”, the Addis Tax Initiative (ATI), the German Development Institute (DIE) and the Council on Economic Policies (CEP) hosted a joint workshop on TEs. In the workshop held from 9 to 11 November 2021, scholars, government officials, representatives of international organisations and other experts came together to discuss ongoing research and initiatives on TEs.

The participants were welcomed by Mr. Christian von Haldenwang (DIE) and Ms. Anca-Maria Szigeti (European Commission, Co-Coordinator of ATI Consultative Group 3). Mr. Sanjeev Gupta (Center for Global Development) opened the workshop illustrating the urgency and potential of promoting tax reforms to mobilise domestic resources in low-income countries in order to finance the Sustainable Development Goals (SDGs) and respond to the effects of COVID-19 on revenues and expenditures.

The link between TEs and development was the overarching question of the first Panel of the workshop. The first speaker, Mr. Flurium Aliu (CEP), highlighted findings on the use of TEs utilising the Global Tax Expenditure Database (GTED). For example, the use of investment related TEs is more pronounced in countries with lower GDP per capita, while households-focused TEs are more common in countries with higher GDP per capita. In his presentation, Mr. Sacchidananda Mukherjee (National Institute of Public Finance and Policy – NIPFP, India) unveiled trends and patterns of tax expenditures on federal taxes in India. He presented data showing that the overall TEs of the Union Government have decreased from 8.1% of Gross Value Added in 2008/09 to 1.5% in 2019/20, mainly due to reductions of TEs on indirect taxes. In a similar vein, Mr. Kyle McNabb and Mr. Harshil Parekh (Overseas Development Institute – ODI) provided insights on practical challenges and lessons learnt from TE reporting in Rwanda and Uganda. When reporting, they highlighted the importance of considering the interests of target audiences, such as civil society, ministries, parliament, tax administration.

The second Panel of the workshop addressed the key challenges of TE reforms from a diverse national perspective. Mr. Habtamu Alamayo Farada (Ministry of Finance, Ethiopia) started with a discussion on the difficulties of estimating and reporting tax expenditures in Ethiopia, including the lack of integrated database, the dispersed state of TEs, and the lack of evaluation and monitoring system to measure the impacts of TEs. Ms. Tantely Ravelomanana (Ministry of Economy and Finance, Madagascar), then, highlighted the process and results of TE reporting in Madagascar, which has been conducted annually since 2015. She pointed out that the number of reported tax expenditures has increased by 11% in the last five years.  Nevertheless, challenges remain with regard to data availability, consistency of tax policies, and the possibility of conducting accurate evaluations. In the third presentation of the Panel, Mr. Jordan Simonov and Mr. Zoran Gligorov (Ministry of Finance, North Macedonia) shared TE reporting advancements in North Macedonia, where tax expenditures currently represent 3% of GDP and 11.7% of total revenues (including social contributions).

Mr. Yuji Miyaki (Asian Development Bank – ADB) made the first presentation of the third Panel of the workshop, focusing on the role of ADB in supporting TE reforms in Asia, and citing country experiences from the Philippines and Azerbaijan. Mr. Paolo di Renzio (International Budget Partnership – IBP) discussed a topic from a series of studies conducted on tax expenditure governance in Latin America. The presentation touched upon the state of TEs in selected countries, pointing to the need for improved coordination, accountability, performance monitoring, and a broader and more inclusive debate. Mr. Seydou Coulibaly (African Development Bank – AfDB) gave the final presentation of the Panel where he discussed an empirical study that measured the impact of global tax reforms – the OECD/G20 Two-Pillar Solution to Address the Tax Challenges Arising from the Digitalisation of the Economy – on TEs and tax revenue in Africa. The empirical results suggested a negative association between TEs and the global minimum effective tax rate at 15%, and provided preliminary evidence that tax expenditures may decrease when the global minimum tax rate is set at 20%.

Ms. Suranjali Tandon (NIPFP, India) started the last Panel of the workshop continuing the discussion on the international tax reforms. She pointed out that global tax reforms affect statutory tax rates (STRs), but treaties will have a higher impact on STRs when there is capital control. Commenting on the impact of TEs, she suggested that the cost/benefit evidence of TEs in developing countries is ambiguous. Mr. Fayçal Sawadogo (U. Clermont Auvergne – CERDI, France) discussed a collaborative study on the worse forms of tax incentives with a special focus on their redistributive effect. The study noted that, in a crisis recovery period, the competition to attract capital will rise which leads to a rise in the number of incentives offered. However, the FDI productivity impact of tax incentives remains unclear. Based on the assessment carried out, tax credits are suggested as best-practice incentives.

Ms. Sabine Laudage (DIE) made the third presentation of the Panel on an empirical study which evaluates the growth effect of tax incentives given to attract foreign direct investment (FDI). The results of the study suggested that FDI is associated with high GDP. However, FDI will have a higher growth effect when STRs are higher. Finally, Mr. Jean-François Brun (CERDI, France) discussed a technical paper prepared to develop a regional framework to evaluate and monitor TEs in 16 west African counties, in the context of ECOWAS/WAEMU regional integration project. The objective of the regional observation was to measure the effect of TEs and revenue loss, rationalize tax exemptions, develop a homogenous approach to assessing TEs, and limit tax competition among the countries.

At a final roundtable discussion on approaches to tax expenditure reform, moderated by Ms. Nana Ama Sarfo (Tax Notes International), the participants shared perspectives from their respective country, regional and global experiences. The lively discussion saw the contributions of Mr. Agustín Redonda (CEP), Ms. Juvy Danofrata (Department of Finance, the Philippines), Ms. Liselott Kana (UN Committee of Experts on International Cooperation in Tax Matters), Mr. Santiago Díaz de Sarralde (Inter-American Center of Tax Administrations – CIAT), and Mr. Steve Rozner (USAID). In country context, the discussions covered tax incentive rationalisation in the Philippines, the nature of TE reforms in Chile, and the Caribbean and the Pacific. In addition, the role of international organisations, such as the UN Tax Committee and CIAT, in making TEs beneficial to developing countries was raised. Going beyond specific countries, the deliberation touched upon a range of topics including obstacles to successful TE reforms, TEs and competition in South-East Asia, TEs and sustainable development goals (SDGs), etc. The potential role of TEs as a tool to promote technological advances, gender equality, and climate issues was highlighted. Further, the need for country ownership of TE reforms and the participation of local stakeholders, such as CSOs, and the media, was underscored.

Closing the workshop, Mr. Sebastiaan Wijsman (ATI Consultative Group 3 Co-Coordinator) and Mr. Christian von Haldenwang (DIE) highlighted the success of the workshop in terms of connecting the works and ideas of academicians, policymakers and experts, as well as bringing tax expenditures out of the shadow, and giving the attention they deserve. Addressing this topic, which is highly relevant for increased DRM in developing countries, has not been more urgent than in the post-COVID era, and this will be a central topic in ATI's work in 2022.