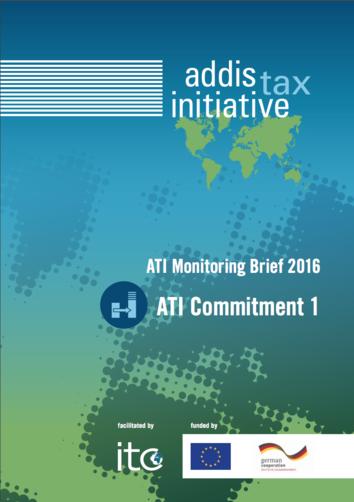 This Monitoring Brief on Commitment 1 of the Addis Tax Initiative is the first of three ATI Monitoring Briefs, each of which is concerned with the analysis of one of the ATI commitments. The results presented are based on data reported to the OECD Development Assistance Committee (DAC) under the CRS (Common Reporting Standard) purpose code 15114 (Domestic Revenue Mobilisation – DRM). Several development partners (namely the EU institutions, France, Germany, the Netherlands, the United Kingdom and the United States) have adjusted their original reporting to the OECD DAC.

In 2016, gross disbursements accounted for 358.18 million USD and commitments for 375.60 million USD, which represents an increase of 61% and 58%, respectively, with regards to the ATI baseline. The overall increase in support to DRM is driven primarily by two substantial loans by France. Excluding these loans, ATI development partners’ support to DRM in 2016 slightly decreased in comparison to the 2015 baseline, namely by 9% of gross disbursements and 8% of commitments. Concentration of support is more pronounced than in 2015. In 2016, three countries receive almost half of total Official Development Assistance (ODA) for DRM. Indonesia, Armenia and the Philippines are the three largest recipients, making Far East Asia the region that received the largest share of ATI development partners’ support to DRM in 2016 (about 37%). Considering the numbers excluding loans, Sub-Saharan African remains the most supported region (receiving about 39% of total grant support); a trend that has not changed since 2015. A positive trend shows the increasing share of ODA support to DRM received by ATI partner countries, highlighting the commitment of ATI partner countries to implement DRM reforms. ATI development partners’ DRM support to ATI partner countries in gross disbursements increased from 22.7% of total support (50.88 Mio. USD) in 2015 to 50.0% (179.20 Mio. USD) in 2016.

The ATI development partners reaffirm their strong commitment to enhance support for DRM while acknowledging that it will be of crucial importance to put the additional ODA to use in an efficient, effective, and coordinated way in order to support partner countries by significantly stepping up DRM. The recently inaugurated ATI Consultative Group on Commitment 1 therefore agreed to, inter alia, look into refining the DRM database, which provides all relevant country data in order to enable informed decisions when coordinating support. Other issues to consider revolve around analysing partner countries’ own DRM strategies as well as facilitating the provision of support to DRM.

The data was collected in 2016, meaning that a relatively short temporal gap between the launching of the Addis Tax Initiative in mid-2015 and the observation of the impact of the commitments limits the robustness of these results. A considerable time lag often lies between political commitments and the budgetary adjustments needed for the planning and implementation of new projects. It is therefore too early to draw conclusions on whether or not the ATI development partners are on a path to reaching their commitment to double support to DRM by 2020.